Ordinarily, we don’t cover downloadable game releases here;  we focus on the larger disc-based releases, on the theory that it takes a really big and chunky game to really generate the sorts of load screens that we’re normally interested in.  However, I want to make an exception for the latest creation by Twisted Pixel.  It’s a puzzle-based platformer with heaps of charm, and it’s obvious that some member of their development team took notes on our rating criteria at some point during development, and endeavoured to do everything just right, in exactly the same way that most mainstream development studios endeavour to do everything just wrong.

I mean, look at this load screen, just look at it: 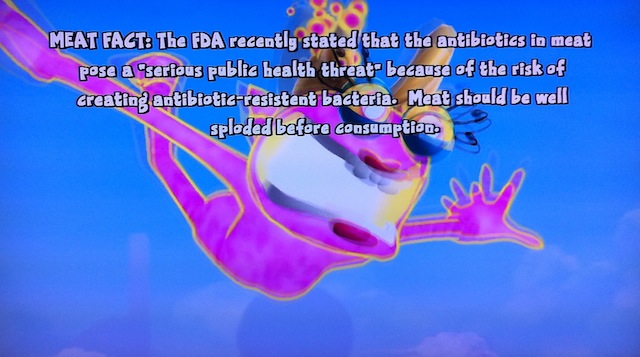 Now that is a sexy loading screen.  Things to notice:  Smooth animation throughout the load, and no fade to black between loading screen and gameplay.  That’s worth five base points on our objective loading screen rating scale.  Notice, fun tips that don’t read as though they were transcribed from a manual, worth one bonus point.  Also notice the complete lack of any “loading” text, spinning badges, or activity lights.  This is the first loading screen we’ve covered that has had its rating capped because it has exceeded our highest possible score (plenty have been capped for going below the lowest possible score).

Now, at about this point in most reviews, I have to point out some other loading screen;  a laughably unpolished screen which brings down the title’s average score.  Well, here’s Ms. Splosion Man’s other loading screen, the one it uses when loading into a level: 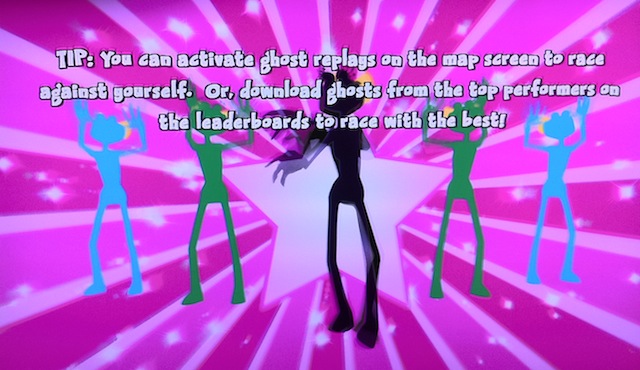 It’s fully animated, both the background and the five silhouetted dancers.  What’s more, it has a fancy transition where the new and old scenes are drawn genlock-style into the centre silhouette as the camera zooms in on that dancer, giving an even slicker transition into and out from the loading screen.  As above, no “loading” text, no spinning badge, nothing to detract from this little slice of loading screen heaven.  Another perfect score.

So is Ms. Splosion Man the best game ever, according to our objective scoring criteria?  Only its rating can tell us for certain..