So here’s a game that many of us never expected to see;  an open-world detective game which has been in continual development for well over seven years.  In a world where most video games are rushed out in eighteen months or less, and even “triple-A” titles are typically completed in well under three years, just imagine the sort of loading screens which would be achievable with a full seven year development timeline.  Booting the game up for the first time, I was quite giddy with anticipation of the first load screen.  Ladies and gentlemen, I present to you the longest-awaited load screen yet: 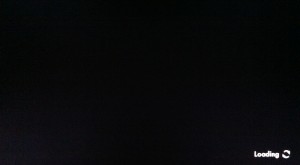 The screenshot above is the standard loading screen, commonly seen when beginning one of the game’s chapters, or when using a “fast travel” mechanism to rapidly transit from one part of the city to another.  As you can see, it is about as bad an example as we’ve ever seen;  flat black backdrop, “Loading” text, and a spinner.  Worse, the spinner is made up of two arrows which indicate spinning even in a static screenshot.  It’s quite disappointing to see so little effort on such a core element of the game, even when seven years of development time were available.  Team Bondi:  you need to lift your game!

There is a second loading screen, though, for loads which take more than four or five seconds.  Here it is: 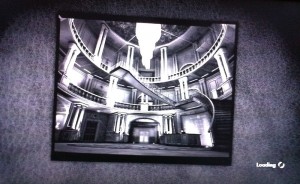 This loading screen displays a static screen with a black and white photograph which is largely unrelated to what is being loaded.  As with the more usual loading screen, there is loading text and a spinner.

Some have come forward suggesting that LA Noire be considered a contender for game of the year.  But to be honest, looking at these screens (and the resulting ratings), I can’t see that as being likely.  Really, at this stage, there’s nothing else to do but to go to the scoring.