Prince of Persia makes a nice change from all the complicated multiple-load-screens-in-one-game that we’ve been seeing lately;  it’s a nice return to the heady days when games had only a single load screen which was good enough for every purpose. 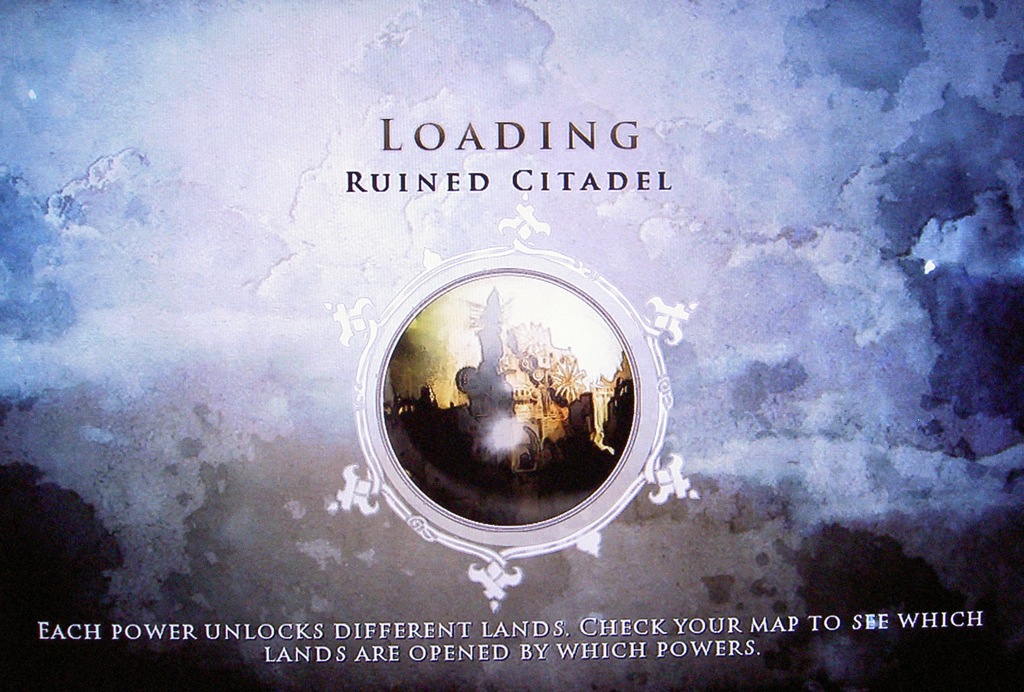 Prince of Persia makes heavy use of streaming technology as you move around within the contiguous world, which means that as long as you’re just running around, you won’t see a load screen at all.  The places where the screens crop up are typically only in two spots;  when the game switches from the main menu into the game world, and when you teleport directly from one part of the game world to another (which is allowed in limited circumstances).

At an initial glance, the screen looks okay.  It has an elegant marble backdrop (two base points).  Okay, there’s that annoying “Loading” text which will earn a small penalty, but there’s a nice little text hint at the bottom of the screen.

However, there are problems.  The first problem is that the text hint isn’t actually very useful;  it’s almost always a repeat of tutorial information which you’ve received earlier, and so only serves as a reminder of something you’ve already learned;  not as actual useful or entertaining information.  But there’s a worse problem;  the text isn’t actually present for the full duration of the loading screen.  It fades in after several seconds worth of loading, which often results in the text appearing for too short a time for the player to actually read it.  For these two reasons, I am not awarding the “interesting text” bonus point.

What’s more, take a look at that circular shape with the spokes around the image showing where we’re travelling to.  You guessed it, it’s spinning.  That’s the second largest loading spinner I’ve ever seen!  And it’s  incurring the loading spinner penalty.