It was only a matter of time before the Halo franchise branched out into entirely new directions;  with Halo series’s fantastic highly animated loading screens which catapulted the series into such success, someone was bound to wonder what they could do in a genre outside the first person shooter.

Now Ensemble Studios has brought the Halo world to the Real Time Strategy genre.  Of course, they’re not Bungie, and so one can only wonder how well they’ve managed to measure up against Bungie’s amazing efforts. 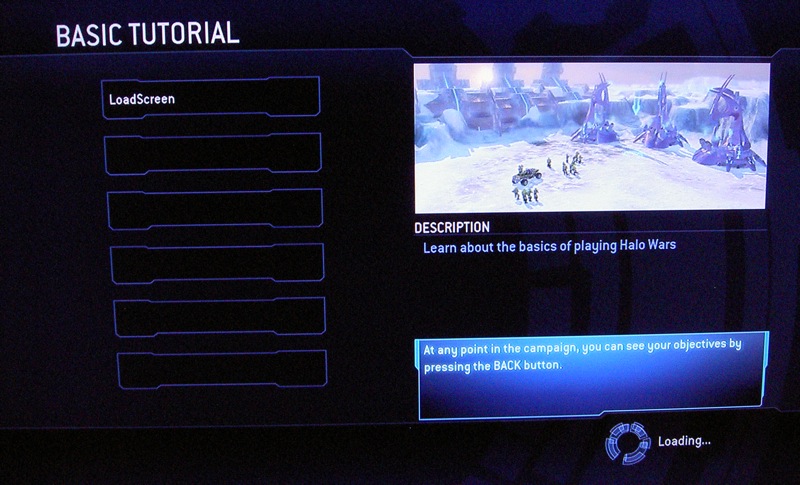 The above is likely to be the first load screen you see in Halo Wars;  it’s the load screen used while entering the game’s basic tutorial.  It’s a static backdrop with some text to read, including a tip.  However, as the gameplay tip is just a reminder about basic game controls and is not written to be interesting or entertaining in any way, it does not earn the “entertaining tip” bonus point.

In a rare move backward for the Halo series, they’ve added the word “Loading” to their load screen, and a loading spinner at the bottom right corner of the screen.  The eagle-eyed among you will notice that there’s also a second loading spinner, this one huge, and only partly visible in the background behind all of the static elements.

There’s a second loading screen as well, this one used for single-player campaign levels.  It’s much simpler than the first one:

Just a static screen with the two load spinners.  Well, it could have been worse!   At least they removed the “Loading” text from this screen.

So overall, whether or not you were a fan of the original Halo series, I really can’t recommend Halo Wars.  The load screens show an overall lack of effort and attention which is really glaring within this series that usually has had such high standards.  It’s too bad.