Infamous is an urban super-hero game which charges the player with making moral choices in his attempt to free his home city from.. whatever it is that’s going on.  While the game has been getting a lot of press on various high-profile sites, I’m not really sure what they’re going on and on about.  It seems a little lackluster from my point of view.  I mean, just look at that load screen. 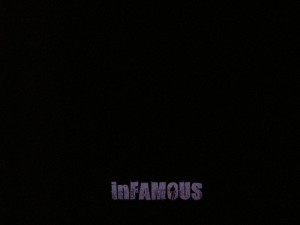 Full review beneath the fold.

Well, that’s a flat black screen, with the game logo on it.  The logo has a pulsing blue glow (not visible here), which I’m scoring as “activity lights”, in our objective scoring criteria.

Infamous is an “open world” game, and does not visit the loading screen often;  mostly just when initially loading a saved game, and when it needs to quickly transport the player to a new, distant location (most frequently to a medical clinic, if the player has been defeated in combat).  So for those who care about the frequency with which they’ll see the loading screen, the answer is “inFrequently”.